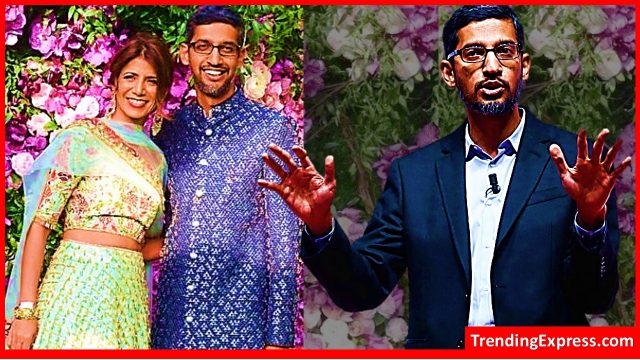 Google CEO Sundar Pichai love story: He was prevented from resigning by Anjali

Sundar and Anjali were together since college time | He proposed Anjali

Sundar Pichai is known as Google CEO. But here we are telling you about his wife Anjali. There was a time when he was about to resign Google but now he stopped at the behest of his wife Anjali and later he became the CEO of Google. Sundar and Anjali were together since college time.

He proposed Anjali when Sundar Pichai and Anjali studied at IIT Kharagpur. Please tell that after that he married her as well. Anjali is born on 5 November 1972 in Kota. Please tell that they have an IIT Metallurgical Engineering degree.

Sundar Puchai received an offer for a tweeter job in 2011. At that time, Anjali had asked not to quit Google’s job and in 2015, four years later, Sundar Pichai was made CEO of Google.

Sundar Pichai, who worked for Google in 2004, and Anjali have two children, a son and a daughter. At the time, Anjali was Sundar’s girlfriend. Sundar did not have much money during that time. Due to this, Sundar did not even talk to Anjali. But even then Anjali did not leave Sundar Pichai.

Please tell that when Sundar Pichai and Anjali were in college, Sundar used to wait for hours under the girls hostel to meet Andali. Not only this, they used to send any girl to them to bring down Anjali.

We hope you enjoyed this love story. To read these type of article, keep visiting trendingexpress.com

UP board Paper Leaked: Solved paper out of 12th physics 2020 Exam, two teachers in custody

UP Board: Action will be taken against the teachers for not completing the course, Click here