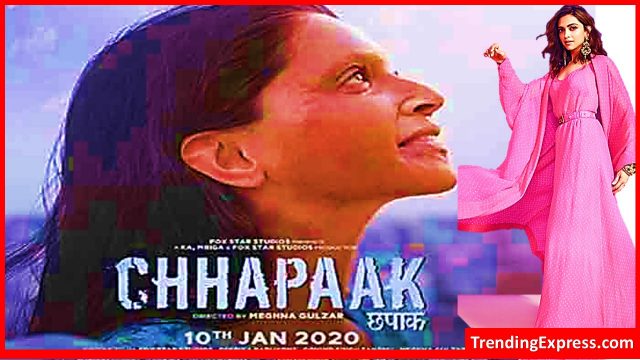 Film will earn so much on the first day can earn 5-6 crores. Know more in this article. Chhapak film is made on a budget of around 40 crores.

Chhapak film is made on a budget of around 40 crores, then the film will have to earn at least 80 crores to be a hit.

Deepika Padukone’s film Chhapak is scheduled to release on January 10. Meghna Gulzar directed film is the story of Acid Attack Survivor. Vikrant Messi will be seen playing an important role alongside Deepika in the film.

Prior to the release of the film, predictions have been revealed by the film pundits about the film’s earnings. Film pundits believe that Meghna Gulzar-directed film can open 5 to 6 crores at the box office.

At the same time, some film Pandito’s claim that the earnings of Chhapak will depend entirely on the word of mouth.

If the content of the film attracted people, it could prove to be the first hit of the year.

The film will earn so much on the first day

According to Pinkvilla and film trade analyst Girish Johar, Ajay Devgn’s film ‘Tanaji: The Unsung Warrior’ is releasing on January 10. This may affect the film splash. Johar believes that both films have different target audiences, yet its film may fall on Chhapak.

According to Girish Johar, Chhapak can earn 5-6 crores on its first day. The rest depends on the film’s review and word of mouth. Estimates from Times Now and trade analyst Sumit Kadel show that the JNU controversy may make a difference of one to one and a half crores of revenue on the issue.

Now this film will take an opening of 6 to 7 crores.

Low budget and low screen can be the reason

The film Pandito also believes that if the Chhapak film is made on a budget of around 40 crores, then the film will have to earn at least 80 crores to be a hit. At the same time, the film’s low screen can affect the film’s earnings.

The impact of JNU dispute will remain

Let us tell you that recently, Deepika Padukone’s arrival at Jawaharlal Nehru University (JNU) to meet the violence suppressed students has become a storm on social media. Especially his film ‘Chhapak’ on Twitter has come under control.

boycottchhapaak remains the top trend on Twitter and people are trolling Deepika. At the same time, some also supported the actress.

Well… Amidst these controversies, there is a lot of talk about the film. This can make its box office impact. So this film earning may be reduced or may increased for this year.